Get out your gloves and head for the Big Dig! 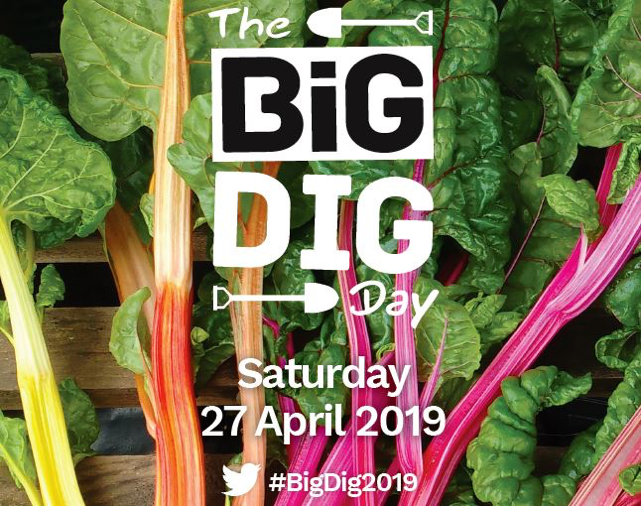 This Saturday is Big Dig Day - the annual day when community gardens welcome volunteers and visitors, new and old, to explore how to grow food and celebrate the start of spring and the new growing season.

The Long Border runs alongside the Grade II listed West Wall, which dates from the 18th Century or earlier.  The wall continues to fulfil its historic function of separating the formal gardens and ponds in the vicinity of Broomfield House from the parkland that is now referred to as the Upper Field.  It was shown on a map dated 1754 as being lined with trees, but some time later, probably after the house and grounds were sold to Southgate Council in 1903, the trees were replaced by the familiar perennial herbaceous border.

For decades the Long Border has been one of Broomfield Park's most notable features, but unfortunately the days when councils could employ large teams of gardeners are long gone and it's not for nothing that the border is called "long".  The park now has only one gardener, so the Friends of Broomfield Park's Conservatory team often come to her help.  This Saturday they are calling on anyone who fancies putting on their gardening gloves to come along and help them weed and renew the part of the border which is next to the Conservatory.

There will be two sessions, from 10am to 12.30pm and from 2pm to 4pm - though if you can only spare an hour, that's fine.  You'll be working alongside some expert gardeners, but if you don't belong to that category don't let that put you off - it could be a chance for you to pick up some new skills and make some new friends, and the Palmers Greenery community cafe, with its home made cakes, is only a minute's walk away!

If you have them, please bring along weeding tools, garden fork or spade, but if you're not able to there will be some available in the park.

The 71st year of the North London Netball League's presence in Palmers Green might herald a (literally) brighter future for netball in our part of the capital, or it could be the League's final season - it all hangs on a vote that will be taken at next month's meeting of Enfield's planning committee. Your voice too might help sway the committee members in favour of granting planning permission for an upgrade to the courts which has the full support of the Friends of Broomfield Park. Read more

Hopefully, it won't be too long before the general public can again visit our mini-Kew Gardens. But in the meantime, a flavour of Broomfield Conservatory's interior has been created outside for all to see. Read more

The new wetlands in Broomfield Park have been shortlisted for an award by susdrain, a 'community' which supports the delivery and maintenance of sustainable drainage systems (SuDS). Read more

During May Friends of Broomfield Park invited people to send them photographs for a Virtual Flower Show. For June the focus will be on trees, starting with this amazing shot by Tracey Kelly. Read more

Throughout their existence, the Friends of Broomfield Park have been helping make the park 'green' in the modern environmental sense of the word. Last week they published a document outlining their work to date and what they are planning for the future. Also highlighted are the FoBP's community and educational roles. Read more